Why should you have your hay analyzed?
What will it tell you?

The idea of analyzing your horse’s hay is fairly new to many of us. Traditionally you would contact your “hay guy”, place an order, specify first or second crop, and then take delivery of whatever showed up in the barnyard. Or maybe your hay source is your local feed store and you take whatever is available. Perhaps you produce your own hay. In any of these cases, do you really know the calorie, protein, and nutrient level in your hay? Does it matter?

Forage should be the major part of your horse’s diet. It’s an important source of fiber, nutrients, and calories, so it’s a good idea to know what is actually in the hay that your horse is eating. The purpose of grain in your horse’s diet is to provide additional calories that he can’t get from his hay or pasture. Perhaps he is a performance or lesson horse who expends a lot of calories in his daily routine, or he has no access to pasture. He may not be able to get all the calories that he needs from hay. Then there are horses that can’t effectively chew their hay, perhaps because of age, but that is a topic for another time.

Maybe you are thinking that it doesn’t matter because you’ve already bought your hay and you are not about to throw it out and go in search of more. Analyzing your hay isn’t about determining how good or bad it is. It’s about determining what you have and then making the most of your investment.

Let’s look at some examples. For now, we’ll leave grain out of the diet.

You probably know that on average a horse needs about two percent of his body weight in hay to maintain his weight if he isn’t doing any hard work. This is a common number that we use when determining how much hay to stock for the winter. Let’s take a closer look. If your horse weighs a 1000 pounds, that works out to 20 pounds of hay per day, just to maintain his weight. Perhaps your horse is an easy keeper though and gets fat when he looks at a round bale. Perhaps he has a higher metabolism or has trouble holding his weight when the temperatures dip. This two percent rule is a good guide, but in reality, we should consider a range of 1.5% to 2.5% when we talk about hay needs.

What does that mean in terms of calories? You may know that the average 1000-pound horse needs an estimated 16,000 Calories per day if he isn’t doing any work. If he’s getting 20 pounds of hay and nothing else, how many calories is he really getting? (A note about Calories vs calories: most analyses will use the term kcals, or kilocalories. This is equal to one Calorie with a capital C. We’ll use this term when talking about specific numbers. The more common term of calorie with a small c is used in this article when no specific numbers are attached.)

This is where a hay analysis can be very helpful. Suppose your results show that your hay has on average 800 kcal per pound. Great- that’s easy math- 20 pounds of hay should fill the caloric needs of an idle horse. But what if your hay tests at 700 kcal per pound? Now he needs almost three pounds more per day. Not a big deal, but if you aren’t aware of that you may find your horse is skinnier than expected when he sheds his winter coat. That’s because his hay is providing only 14,000 kcal a day. If your hay tests at 950 kcal per pound and you are feeding 20 pounds, your horse may only need 17 pounds and may be surprisingly plump come springtime. He put those extra 3000 kcals per day to good use!

Now let’s add in exercise, or lack of exercise, and you can see how the hay equation starts to change. If your horse is getting 20 pounds of hay that is 700 kcal per pound, he is getting 14,000 kcal per day just from his hay. If he is being ridden or worked on a regular schedule, he needs more than the 16,000 kcals we talked about earlier. He is going to need more groceries.

What if your horse is a bit thin going into winter and you are trying to put weight on him? If your hay is lower in calories, he’ll need help. He may need additional grain or a high calorie supplement or access to more hay.

What if he is an easy keeper? Let’s say your hay is a very respectable 950 kcal per pound, and he’s getting 20 pounds per day. This works out to 19,000 kcal per day just from hay. If he isn’t doing any work or living outside in the elements 24/7, he’s probably going to gain weight.

It’s important to note here that hay typically may not supply all your horse’s protein, vitamin, and mineral needs. This is why feed companies offer ration balancers. They provide additional nutrients without too many extra calories. Balancers differ depending on the manufacturer but on average offer 1000 kcal per pound.

Hay analysis  provides more information than just calories and nutrients. Another measurement is the amount of carbohydrates. If you have a pony that is prone to laminitis, or horses dealing with insulin resistance, or performance horses with higher energy needs, this is important to know. You can then make better decisions about the grain that you are feeding, or you may become aware that you must soak your hay for certain horses. This isn’t something that you can tell just by looking at the hay.

Digestibility of the hay is another important consideration. Highly digestible hay means that more of the nutrients are available for use by the horse, while a lesser digestible hay may be a better choice for easy keepers and idle horses. The amount of insoluble fiber can also be determined, which can help you decide if your hay is a premium hay or “busy hay” suitable for keeping your horses from chewing their stalls and fence rails. The analysis can also tell you how much moisture is in your hay: especially important to know if you plan to store it.

Most of us don’t weigh our hay before we throw it in the stall or stuff it into a hay bag. It’s worth a few minutes though to weigh your horse’s typical meal and get an idea of how much he is eating. Some of us let our horses have free access to round bales, so it can be difficult to tell how much they are eating. Slow feeder nets and grazing muzzles can be highly effective in slowing these horses’ intake if they are overindulging.

So…how do you get your hay tested? Check with your local feed store to see if they will submit a sample for you. Many will offer this to their customers at no charge. If your feed store doesn’t offer this, ask them to check with their feed representative about providing this service, or ask another feed store.

A gallon-sized sealable bag will hold enough for a sample. Pull handfuls from several different bales to get a good cross-section. Hay quality differs from one year to the next, from one side of the field to the other, and from one cutting to the next. If you have from multiple suppliers or multiple cuttings, make up a separate sample bag of each. Finally, remember to label your sample with your contact information.

You can also ask your local feed store if they test the hay they sell. Some may send in samples if they receive large quantities, such as tractor-trailer loads, from one supplier. If they are buying from farmers in the area though it is unlikely, as they will frequently sell out of one farmer’s hay quickly or may not have a way to separate the hay from different farms.

There are many factors that determine the quality of your hay, and many that we can’t control. Farmers must try to squeeze in their cutting around wet weather, or must deal with low yield due to drought, or are simply constrained by how much available time they have to cut and bale multiple fields. Perhaps the fields haven’t been fertilized or had lime added for a few years. Every year depletes the available resources in the ground, and it is necessary to replenish fields periodically. All this matters to the hay quality, which can change on a nearly daily basis during the growing season. This year’s drought has been particularly hard on the local hay industry, with many farmers in southern Maine reporting a 40% reduction in their hay crop. Although their fields may have produced nice hay last year, this year’s crop was stressed and hay may be less nutritious. By taking a few minutes to collect your hay and submit it for analysis, you will have a better idea of what your horse is actually eating. Then you can make better decisions regarding his need for additional grain, ration balancers, or supplements.

In the next article we’ll discuss how to interpret your hay results.

Published in August, January and News 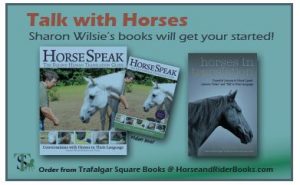